02-06-2016 11:58:39
Dennis Lijnsveld and Juul Spies, our colleagues at BIT, took up the idea last year to do a cycling tour to support a good cause. Because both of them have experienced the effects of cancer in their immediate surroundings, the choice was easy; Alpe d'HuZes is the event they want to be involved in. Of course BIT supports this tough challenge and wishes Dennis and Juul the best of luck.

A lot has happened between our last update after our training camp and today, a day before the start of the Alpe d'Huzes.

After the training camp we continued recruiting sponsors and training for the tour. However, three weeks ago, Juul got hit by a car during a training session. After two days in the hospital everything miraculously seemed to be okay and he could go home to heal there. At that moment there was a lot of doubt about whether or not he would be able to go to France, let alone cycle there. After a week of bed rest at home, his recovery went really fast. The visible wounds disappeared, stitches were removed and after buying a new bike, Juul carefully tried to start cycling again. Physical symptoms on the side, he quickly decided to go to France as a cyclist, not a supporter. Partly because of the accident, we unfortunately had to cancel the tour we announced in our previous blog.

Luckily we got to go to France to see both our guys cycle. Last Sunday morning our alarms were set at four in the morning to start the long trip to the French Alps after a good strong cup of coffee. After spending more than half a day in the car, we arrived at our campsite in Allemond, a small 10 kilometres from the foot of the Alpe d'Huez, at six in the evening. After nothing but rain for the last few hours in the car, we got lucky with half an hour of good weather in which we could set up our tents. Short after, however, the rain started again. Tired from the ride, we decided to go to bed early, hoping the next day would be better so we could make a test ride on the Alpe d'Huez.

Getting to know the Alpe d'Huez

Waking up to the patter of rain on our tents on Monday morning, we feared the worst for the weather. We would have to go up the mountain in the rain. While we have breakfast and ready our bikes for our first climb, the rain subsides a little and when we are ready to leave, it even seems to be dry for a moment. The forecasts, however, predicted more rain to come so we brought our raincoats anyway. We took our time biking through the valley from our campsite to the foot of the mountain. Now was the time to enjoy the beautiful scenery before we had to start our challenge with the climb. As we get closer to the mountain, excitement kicks in. We see the roadblocks being set up for Thursday, crush barriers being placed along the roads and when we pass the start we really get the feeling; this is it. We immediately turn back to the inner chainring because Juul remembers from previous times that the first part of the climb is really tough with a gradient more above than below the 10%. We choose to both do our own thing at our own speed and agree to meet at the top. As we are biking up, we can immediately see we are not the only ones doing a test ride. We pass hikers, runners, people on rowing cycles and even someone on a cargo bike packed with luggage. Hundreds of us all doing the same thing. Just testing our legs and getting to know the mountain.

After an hour of cycling, Juul is the first to get to the village at the top and five minutes later he has found the finish line too. He was a little faster than he planned to be, but the motivating supporters already lining the roads to cheer everybody on really get you going. After a few minutes he decides to start his descent slowly, since the roads are very slippery from the rain, to pick up Dennis. Halfway through he still hasn't found Dennis, so he turns around to go back up again. At that moment Dennis calls that he has reached the top as well. Half an hour later we are both at the top and we can pick up our start numbers and printed cycling outfits for Thursday.

Once everything is collected, we decide to go back to the campsite because there is another rainstorm coming. During his climb, Dennis saw several riders go down because of the slippery roads. One of them was lucky to be caught by a guardrail instead of tumbling down the mountainside. Unfortunately the rain catches up to us during the descent and we slow down for the last kilometre in the rain. Once back in the valley, the sun starts to break through again and we smile when we cycle back to our campsite. Day 1 in France is over and the climbing turned out to be easier for both of us than we originally thought. 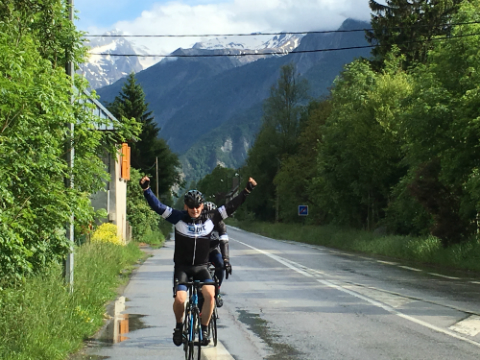 After a good night's sleep, we decided to do an 'easier' climb in preparation for tomorrow, so we go to the Col de la 'Croix-de-Fer'. This long climb starts directly outside our campsite at a large reservoir in the valley. At the start of the climb we see the sign "Croix-de-Fer 28 km" and we know that we have 2 hours ahead with a 5% gradient. That sounds nicer than it is, since we have hardly seen that gradient during the climb. After going around the reservoir, where the road is level for the first two kilometres, we find the next four kilometres with a gradient of 9%! Fortunately that leads us to a little village where the gradient eases up a little. 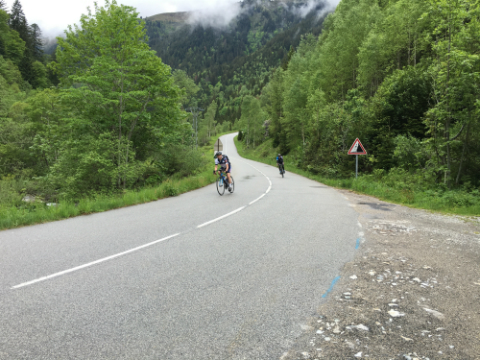 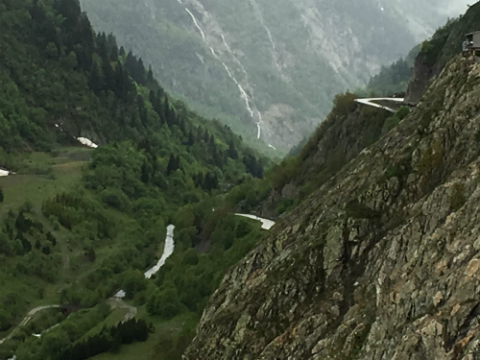 We take a little break because we know we have a steep descent still to do and then a 12% climb. We are only halfway through the climb. About ten kilometres under the summit is a beautiful large reservoir at an altitude of 1700 metres where we keep passing patches of thick snow.

Despite the heavy climbing, the rain and the cold, this is where it gets worthwhile. On our way we pick up another rider and together we climb to the top towards our rest stop on the Col du Glandon.

By now we have reached an altitude of 1900 metres and see our goal of the day at 2,5 kilometres ahead up in the sun. With lifted spirits we finish the last leg of our climb and even get our sunglasses out. Happy and content we start our long descent and know that we do not have to turn one chainwheel until we start the Alpe d'HuZes. 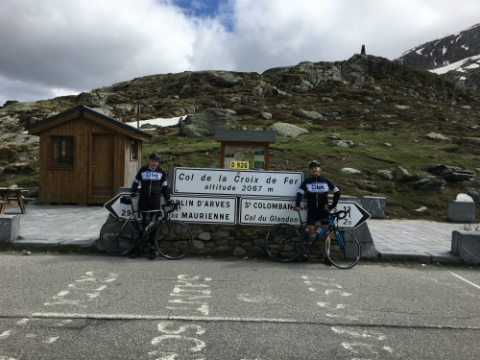 We continue our preparations and we both have individual rides planned as well as practice rides together. Our next update will follow suit with more news and the next rides. Follow us on Strava to stay informed of all our rides.