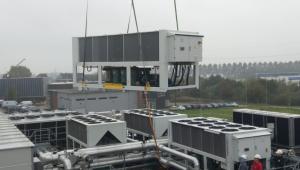 We waited for the last old cooling system to be due for revision before we replaced it with a new one. The old cooling system had two compressors and after 25.000 hours of operations they were ready for revision. This seemed to be the perfect moment to purchase a more environmentally friendly machine, because with the old cooling system we ran into a number of things that stood in the way of energy efficiency. For example, the part of the system that cooled with outside air consisted of elements that had to be cleaned regularly. Because we were unable to properly reach all of these elements, they remained dirty and reduced the efficiency of free cooling.

Below you can find some pictures of the replacement of the last cooling system.