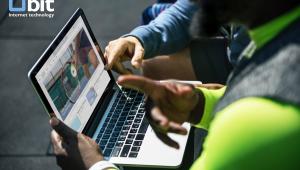 Rejo Zengers is policy advisor at Bits of Freedom and Esther Crabbendam is a campaigner at Bits of Freedom. They have written a guest blog for us to draw attention to the controversial copyright legislation (Article 13). This new law states that providers of internet services are required to check new contents for copyright issues in advance.

Everyone with a passion for the internet must have noticed: the European Parliament is voting on a copyright bill at the end of this month. Part of that is the controversial upload filter. In reality it is not really about copyright, but about monitoring all uploads for any reason whatsoever.

The upload filter affects everyone

Do not be misled. It is not like you only have to worry about this legislation if you are a provider of an internet service that publishes user’s uploads. This bill affects every user of the internet. Every one of us sometimes uses a big platform like YouTube or Twitter. And that means that some of our uploads will be (unfairly) blocked. This is not about shocking or hurtful items. It is about images, videos and messages that you can freely share at this moment. About memes, GIFs and vlogs. And even if you don’t upload anything yourself, you will be affected, because the amount of available content will diminish as well. It is not just about copyright.

Indirectly the impact of such an internet filter is noticeable at well: in a world with less space for parodies and memes, the nature of the public debate will change. And for whoever thinks that is farfetched: realise that Brussels is already negotiating about expanding the proposed upload filter. The filter that will be voted on at the end of this month is formally about copyright, but might be used to start blocking alleged terrorist expressions. What will be the next step?

The text that the parliament will be focussing on, is a disaster. The initial proposal already was: far-reaching consequences and extremely vague definitions. The wording is so bad, that throwing away the entire text and starting from scratch would have been the only solution to make it better. Instead, people have tried to fix the text. The result: the length of the text increased a lot, but it is still just as far-reaching and vague. There are a few services, like Wikipedia, that are excluded from the changes. Other limitations, like those to protect start-ups, are mostly cosmetic and not very effective.

It is important for internet users to speak up, and they are doing so en masse. For example, the petition against this bill is the petition with the most signatures ever. But also providers of internet services can have an impact. We often notice that politicians are more sensitive to economic arguments than arguments about fundamental rights. The proposal will limit the freedom of entrepreneurs and undermine the digital ecosystem. Do what many internet users are already doing: stand up for freedom on the internet and call a member of parliament via our tool. You will be calling for nothing (free), but it won’t be for nothing (freedom).

There are a lot of arguments against the internet filter: the limitation of the freedom of setting up your online service, the decline of freedom of speech and the attenuation of the ecosystem for online communication and the limitation of the public debate. The European Parliament is the only thing standing in the way of this bill. And the parliament is there on your behalf. More and more internet users are standing up for this. They are signing the petition against the upload filter and are calling members of the parliament to convince them to vote against this bill on March 26. Do your part.

Use this tool and call members of parliament: https://pledge2019.eu

Speak out on social media. Share this message and your concerns about the upload filter. Tag politicians, businesses and everyone else.


By: Esther Crabbendam and Rejo Zenger, Bits of Freedom