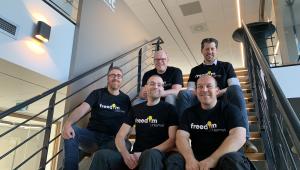 On Monday November 11, 2019 at 11:11:11 hrs, the new provider Freedom Internet was launched. The goal of Freedom Internet is to provide an open and accessible internet for everyone with core values like safety, privacy and quality as the top priority. The launch follows a ten-month period in which the continued existence of XS4ALL was unsure. Freedom Internet uses BIT server rooms for their IT equipment.

Freedom Internet is the successor of XS4ALL, which was set up by hacker organisation Hack-Tic in 1993. In 1998, the company was taken over by KPN, but all of XS4ALL’s core values, for example concerning privacy, still remained. Last January, KPN announced to discontinue the XS4ALL name and house all services at KPN. Dissatisfaction with this decision led to the creation of Freedom Internet. Like with XS4ALL, Freedom Internet counts thinks as privacy and a free and open internet to its core values.

Freedom contributes to a better internet. Technically and socially speaking. Their ambition is to lead the way and contribute to the (global) development of new services in the field of privacy, security, open data and open source. A mission that nearly seamlessly fits with that of BIT.

‘ We have known BIT’s people for over 20 years and know what they are made of, so the choosing BIT was almost a no-brainer. The combination of their activist character combined with the technical expertise ensured that we could launch quickly and, more importantly, safely. We are truly looking forward to expand our collaboration.’ said Anco Scholte ter Horst, managing director of Freedom Internet.

BIT and XS4ALL are going ‘way back’ . We value the same things and are not afraid to take a stand when it comes to political issues that concern the internet. In 2005, for example, we stood side-by-side on the barricades against the data retention act. All members of the parliament got a t-shirt with the text www.bezwaarplicht.nl on it. This playful act urged members of the Dutch parliament to support the objection movement against the data retention act.

In addition, we have also worked together to adopt IPv6 in the Netherlands, we were active members of the NLIP (which we quit together, too) and have known many XS4ALL-people personally for years. About 15 years ago (the old guard of hackers and whizz kids might remember) we sponsored the outdoor internet event ‘ Megabit’ . During this event, internet professionals could get up-to-date with the latest developments in the field of internet, security, hardware, networks and games.

We support Freedom Internet and are proud that they will be using BIT’s server rooms to house their IT equipment.